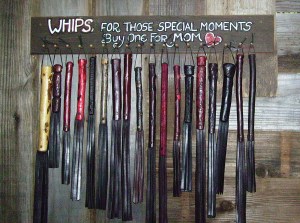 “Thank you Sir! May I have another?”

This seems to be the political discourse these days; Republicans are holding the whip and Obama is their favorite whipping boy.

While the majority of Americans overwhelmingly do not want to go with the dictates of the TeaParty Republicans, the Teabaggers are running Washington. Instead of playing to his base, Obama cows down, time after time, to the most extreme demands of the Teabaggers. He’s playing to the evangelical christian base of the Republican Party, a base which he can never appease.

This author has one question: WHY?

Perhaps The Family has grown so powerful behind the scenes that no one, not even the President of the United States, dare challenge it.

One thing is certain, the Teabaggers stand ready, willing, and able to destroy this country, and will do so, unless they get thier way. So far, no one is willing to call their bet; no one knows if they will blink, because Obama always blinks first.

It’s time for Obama to take the whip.

This is our Open Thread, so flail away.