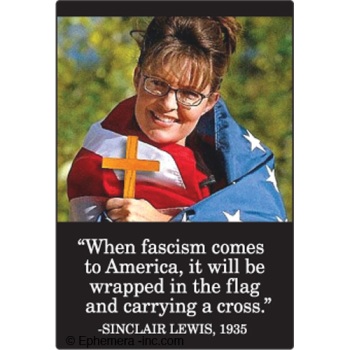 Sarah Palin’s opportunistic and unceasing attacks on a sitting United States President, during a time of war, have earned her the scorching attention of Pravda.

By attacking the democratically elected President of the United States of America at a sensitive time in her country’s history, she shows the tact of a boorish drunkard bawling obscenities at a funeral….

Our own media won’t say Palin’s a traitor — probably because they want to spare us the high-pitched self-pitying whining screech that would emit from Palin and her wingnut protectors — or maybe just because they’re lazy.

If anything is a threat to the national security of the United States of America, it is this screaming, unrefined oaf with as much class as a searing release of flatulence followed by hysterical giggling at a state banquet. Is this what the people of the USA deserve?

Srsly, could anyone say it any better than this?

Bottom line, Sarah Palin and her ilk are traitors to this country.  Not because they constantly attack President Obama — he can take their annoying buzzing — but because they loosen the fabric of this nation by picking at threads.  Day after day, inch by inch, insidiously they do their best to shred what it means to be American.

History will remember these times with shame.

This is our daily open thread — Discuss!

90 thoughts on “The Watering Hole: March 9 — Sarah Palin is a traitor”