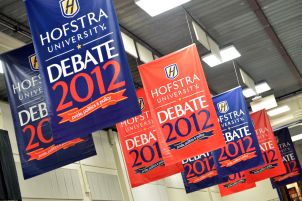 President Obama and Mitt Romney will meet this evening at Hofstra University in New York for their second “debate.”  It will start at 9 p.m. ET, and will be a townhall style format, with CNN’s Candy Crowley moderating.  The questions will come from so-called undecided voters in attendance.  i don’t get the whole “undecided voter” thing, but there it is.

C-Span will have live coverage of the debate here.

Thinkprogress has five facts for us to remember:

1. The deficit is largely a product of tax cuts and wars. The newest report out from the Congressional Budget Office shows that we have a still-large but slowing budget shortfall, with the deficit at $1.1 trillion for 2012. But the issues that are adding the most to our deficit aren’t health care costs or the stimulus; wars and tax cuts are responsible for that.

Zooey:  And remember, it’s a filthy lie that Obama has increased the deficit in any way — he’s actually lowered it.

2. When US officials asked for more security in Libya, they wanted it in Tripoli, not Benghazi.The attack on the United States embassy in Libya was a tragedy that has had a confusing aftermath. Republicans have claimed that employees at the Benghazi embassy asked for more security in the days before the attack, but actually it was the embassy in Tripoli, not Benghazi where the attack occurred, that sought longer hours for its security guards.

Zooey:  Also, remember that the House refused to pay for increased security in our foreign embassies.

3. 72 million people would be uninsured under Romney’s health plan. A recent study of Romney’s health care plan shows that it would increase health care premiums for most Americans, and would leave 72 million people uninsured. If the Affordable Care Act were repealed, 60 million Americans would remain uninsured. Under Obama’s plan, that number is expected to drop to 27.1 million.

Zooey:  Remember, Romney’s plan will cover those with pre-existing conditions, BUT only for people who already have health insurance, which makes no fucking sense.

4. If the DREAM Act were passed, it would add $329 billion to the economy by 2030.President Obama has vowed the pass the DREAM Act — a bill that provides a pathway to citizenship for young, undocumented students and service members — while candidate Romney has said he’d veto it. According to a joint report by the Center for American Progress and the Partnership for a New American Economy, passing the DREAM Act “would add $329 billion to the U.S. economy and create 1.4 million new jobs by 2030.”

5. The “six studies” that Romney cites in defense of his tax plan are actually 3 blog posts, 2 right-wing reports and 1 op-ed. The idea that a Romney administration could give a 20 percent tax cut to everyone, and then pay for it by eliminating loopholes and deductions for the wealthy has been strong refuted by the Tax Policy Center. Romney has cited six other “studies” that confirm his plan could work, but those are dubious: One is a report by the conservative Heritage foundation, one is a paper from a former Bush adviser, one is an op-ed in the Wall Street Journal, and three are blog posts.

Have fun with the live-blogging, all y’all!  There are no rules, but alcohol and a sense of humor really help.  Just sayin’…