Sometimes it only takes a simple one page email letter to tell it like it is. This one, from the Natural Resources Defense Council popped up in my inbox just yesterday, and it took me maybe thirty seconds to act, to add my name to the petition of protest.

Monarch butterflies are in crisis, and we must take immediate action to protect them!

Less than 20 years ago, an astounding 1 billion monarchs migrated to Mexico for the winter. This year, a mere fraction of that — just 33.5 million — made the journey.

Why? In large part it’s because industrial agriculture is killing off the native milkweed on which monarchs depend with a new generation of potent herbicides.

Tell the EPA to adopt tough new restrictions on the weed killers that are wiping out monarchs!

By placing commonsense limits on Big Ag’s rampant use of herbicides like glyphosate — marketed as Roundup by Monsanto — the EPA could dramatically increase the monarch’s chance for survival.

But the EPA is unlikely to do that unless it hears from hundreds of thousands of us!

Monarchs can’t live without milkweed — it is the only plant on which they lay their eggs.

What’s at stake here? One of the most astounding and extraordinary migrations on the planet — a true natural wonder.

Each year, as they have for countless generations, North American monarchs undertake an epic journey, flittering upwards of 3,000 miles across the U.S. and Canada to just a relative few wintering grounds, including Mexico’s Sierra Madre mountains.

But as industrial agriculture has ramped up its use of genetically engineered crops resistant to weed killers like glyphosate, it has also dramatically escalated its use of herbicides — and monarch populations have plunged.

This is the ninth year in a row that the population of monarchs wintering in Mexico has fallen below its long-term average, and this year it hit an all-time low.

Thank you for joining NRDC at this critical moment in our fight to save the monarchs.

So: a common agricultural herbicide (Monsanto’s Roundup) is very likely a major player in the apparently impending destruction/extinction of the Monarch Butterfly. Good old Monsanto. From herbicides to pesticides to genetically modified seeds, the destruction of the biosphere continues unabated . . . because there’s a lot of money in it. And nothing else matters, dontcha know.

I do hope that everyone who reads this will (a) sign the petition, and (b) spread the word far and wide. It’s time that we find the means to destroy something other than butterflies. As for Monsanto? — great place to begin the undoubtedly interminable process of destroying the destroyers. Gotta start somewhere, though. 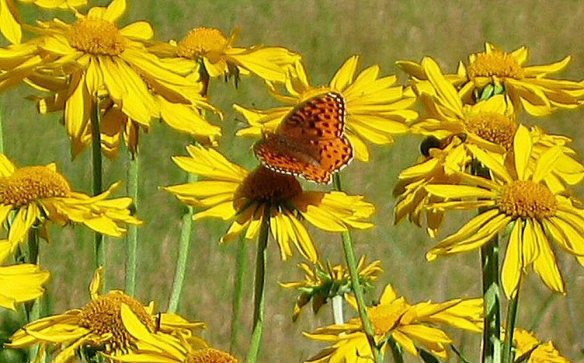