It’s an axiom that’s as old as politics: give a political hack an inch and s/he’ll try take a mile. Sarah Palin, anyone? Steve King? Ted Cruz? Rand Paul? The hack list is, literally miles long, and it can wear one out just pondering it.

Personally, I prefer that other world, the natural world ‘out there’ where in any crevice no matter how small or in any expanse no matter how large or how distant, there exists sufficient allure to captivate the soul and mind of the poet, the artist, the scientist, or even simply the curious. Consider, for example, the following small handful of photographs. Each is simply a fleeting moment’s capture of a split second of time, the content of a single point of ‘space’ ranging in size from a square inch or less to untold tens of thousands of miles. To some, photographs of the natural world are more than simply a graphic record; they are, in fact, a bit of poetry ohne worte, or poetry without words, and perhaps in that sense they stand as evidence that John Keats was absolutely correct when he noted that The poetry of earth is never dead.

Without further ado, a few moments of time, of space that happened to wander by in just the last few days. 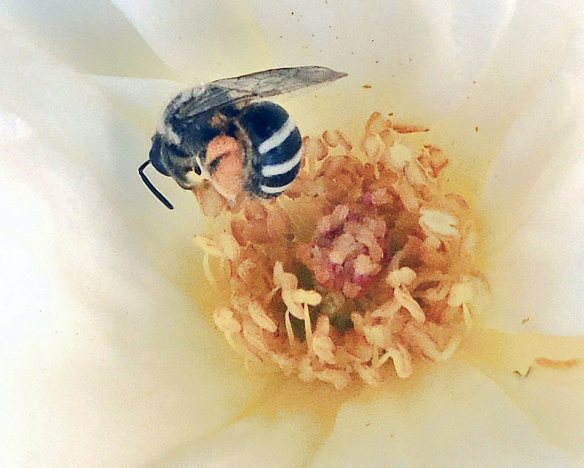 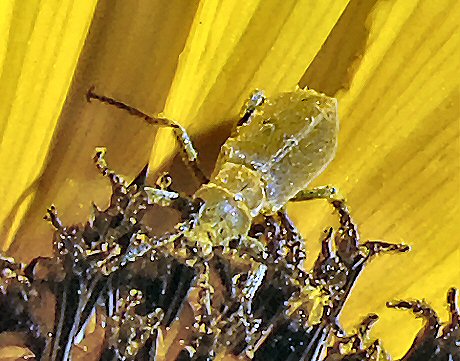 ‘Insect Inside’ his sunflower’s dining room

Interesting to note that the amount of time captured in those five photos combined totals less than one second. The amount of captured ‘space’, meanwhile, ranges from a square inch or less in each of the flower/bug photos to the full moon’s visible surface area of a bit more than 8.5 million square miles. As for distance of the subject from the lens at the time the shutter was tripped, it ranges from two inches to 250,000 miles. Ah, the virtues of technology!

OK. Finally, and last but not least, a single (pictorial) summation of the entire of the Natural World’s opinion of the typical human’s anti-nature and pro-stupid mystique, all on full display within a square inch or two of the REAL world:

Unidentified bug MOONing the WORLD from his private Sunflower!

There you have it: one happy bug both summing up and ‘saluting’ — with total perfection — the nefariousness of the bulk of the earth’s human species. I suspect if he could put it all into words, he might express his thoughts and direct his worthy criticisms in much the same fashion as did William Wordsworth in his masterwork entitled Ode on Intimations of Immortality:

The Rainbow comes and goes,
And lovely is the Rose,
The Moon doth with delight
Look round her when the heavens are bare;
Waters on a starry night
Are beautiful and fair;
The sunshine is a glorious birth;
But yet I know, where’er I go,
That there hath past away a glory from the earth.

The problem, of course, is that these days there are only a relatively small handful of humans with the ability to understand, much less feel any sense of lament. And sadly, not a damn one of them seems to be in much of a position to turn the tide away from destruction, away from greed, away from politics. Maybe if ‘they’ simply paused and took a look around? Nah. As John Ruskin so eloquently summed up the human condition a century or more ago,

Personally, I think I prefer the company of bugs, and flowers, mountains, the moon, and everything else ‘out there’ to politicians, and industrialists, and rich dudes, and stup . . . well, y’know.