“[Man] was born and equipped as an excellent animal,
but he sold his birthright for a mess of pottage called culture
and took on fear and a whimper as a part of the bargain.”
~John C. Van Dyke

Below is one of the most bizarre things I ever recall reading (and I’ve read LOTS of bizarre stuff over the years). This one has to do with Frank Gaffney’s National Security Action Summit in New Hampshire this coming weekend (at which some Republican Clown Car candidates will be in attendance, namely Ted Cruz, Bobby Jindal, Carly Fiorina, Rick Santorum and George Pataki). One of the scheduled speakers is a guy I’ve never heard of before; his name is John Guandolo, himself a former FBI agent who got canned because of a bit of an over-anxious libido with a Virginia businesswoman, an FBI “confidential source.” Among others.

I’ve run across some weird and perverse accusatory theses before, but not sure I’ve ever read or heard anything quite as wild as Guandolo spits out. This an excerpt from a RWW blog entitled GOP Presidential Candidates Will Appear Alongside Disgraced Conspiracy Theorist John Guandolo — baseless garbage all, but undoubtedly part and parcel to this country’s ascendent Ignoranus political pottage.

According to Guandolo, [former CIA Director John] Brennan decided to “convert to Islam” in Saudi Arabia as “the culmination of a counterintelligence operation against him to recruit him.” He alleged that Brennan is now aligned with Saudi Arabia and the Muslim Brotherhood, despite the fact that the Saudi government is one of the region’s chief opponents of the Muslim Brotherhood and bankrolled the Egyptian government’s suppression of the group.

While speaking with conspiracy theorist radio host Rick Wiles, Guandolo said U.S. government officials like Brennan want to “aid and abet the enemy, and that is a criminal act,” adding that Obama is similarly “an individual who is significantly sympathetic to the cause of our enemies.”

Guandolo has repeatedly called for Obama and Brennan to be removed from their offices for their “treasonous” ties to Saudi Arabia, Hamas and the Muslim Brotherhood. In fact, Guandolo even believes that Obama is actively aiding Al Qaeda.

Guandolo wants the police to arrest members of Muslim-American affinity groups, claiming that anyone associated with such groups are “terrorists,” and believes Muslims “do not have a First Amendment right to do anything.”

As the myth-busting outlet Snopes said, “Guandolo markets the idea of an imminent, pervasive threat to security in the United States [that] has resulted from a conspiracy by Muslims to infiltrate the government at its highest levels, and [Guandolo] is paid for his ‘expertise’ through his being hired to provide lectures and training classes on the subject.”

All I can say is those Muslims must be really cool to have found the means to pull all that off! Either that or Guandolo is one more stupid and ignorant American who is willing to effectively offer “aid and comfort to our enemies” via his preposterous theories.

Speaking of bizarre, I decided the other day to get a better look at Donald Trump’s hair (I have no idea as to why, actually), so I googled Donald Trump Photos. Came up with a site that had a bunch of them, and wow, was I surprised with what I found there! Both of these are identified on that site as “Donald Trump,” but with no info as to date or circumstance, etc. Still, talk about bizarre! 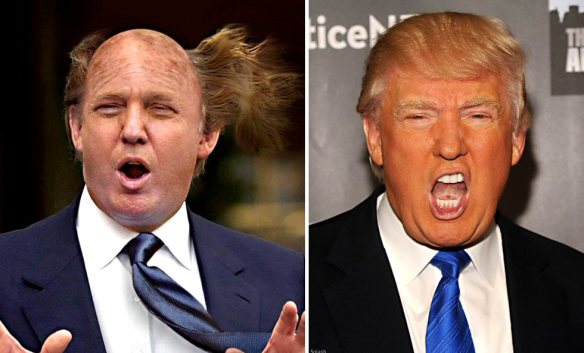 Hard to believe those are two pics of the same dude. Still, the eyes, mouth, and ears all seem to fit. I do have to wonder how much he spends on hair each month, and how many servants it takes to keep it looking exactly the same every time he goes out somewhere. Oh, and I wonder how often must they do the bleach job on his topknot and his eyebrows?

Maybe we’ll find out all about the hair thingee once he’s our POTUS. I, of course, will never learn the answer, whatever it might be. I’ll be too involved in learning how to get along in whichever country I happen to wind up in if “Hair Trump” should happen to prevail in 2016.

Enough of the bizarre — I’m about up to my tear ducts in political horse hockey. Thank all gods for “out there” — pictured here in a couple of brief “episodes” from the last week.

There. I feel better already.