Courtesy of The History Place:

A massive, coordinated attack on Jews throughout the German Reich on the night of November 9, 1938, into the next day, has come to be known as Kristallnacht or The Night of Broken Glass.

The attack came after Herschel Grynszpan, a 17 year old Jew living in Paris, shot and killed a member of the German Embassy staff there in retaliation for the poor treatment his father and his family suffered at the hands of the Nazis in Germany. . . .

For Adolf Hitler and Propaganda Minister Joseph Goebbels, the shooting in Paris provided an opportunity to incite Germans to “rise in bloody vengeance against the Jews.” [highlights mine]

Maybe it’s just me, but when I read those few lines, a whole lot of today’s Republican candidate “mantra” quickly brings back some rather foul recollections of events from days long past. The candidates’ current passions — religious “liberty” (for Christians only),  their anti LGBT, their anti-immigrant and anti-Muslim hatred and fear — seem to me to be legitimate reason to ask that eternally obvious question: where does it end?

On November 9, mob violence broke out as the regular German police stood by and crowds of spectators watched. Nazi storm troopers along with members of the SS and Hitler Youth beat and murdered Jews, broke into and wrecked Jewish homes, and brutalized Jewish women and children.

All over Germany, Austria and other Nazi controlled areas, Jewish shops and department stores had their windows smashed and contents destroyed. Synagogues were especially targeted for vandalism, including desecration of sacred Torah scrolls. Hundreds of synagogues were systematically burned while local fire departments stood by or simply prevented the fire from spreading to surrounding buildings.

About 25,000 Jewish men were rounded up and later sent to concentration camps where they were often brutalized by SS guards and in some cases randomly chosen to be beaten to death.

Is that where we’re headed?

Here are but two — out of what surely are dozens of undoubtedly familiar posts — that “hint” at what several of the Republican candidates have to say on the various matters:

Is Trump Using Hitler As A Populist Role Model?

Rubio, Cruz, Carson, Huckabee, and Trump (at least) have proven themselves to be  completely willing to essentially shout out their religious “liberty”,  their anti LGBT, their anti-immigrant and anti-Muslim hatred and fear attitudes. Perhaps it’s a bit ironic, but the fact is, the bulk of their biases as spouted in the aftermath of the shooting in Paris — the one that’s apparently provided an opportunity to incite Republican Presidential candidates to advocate a rise in bloody vengeance against all of those they proclaim worthy of their (irrational) hate and fear — has become, today, widely sprawled across the entire of our mass media.

Should one of these candidates somehow reach the pinnacle of power in this country, might it portend another brutal and equally deadly Kristallnacht??

The following pic was presented in one of the comments to the ‘Is Trump Using Hitler . . .” post noted above. Might it prove to be an adequate, though obviously abbreviated, portrayal of what might lie ahead? 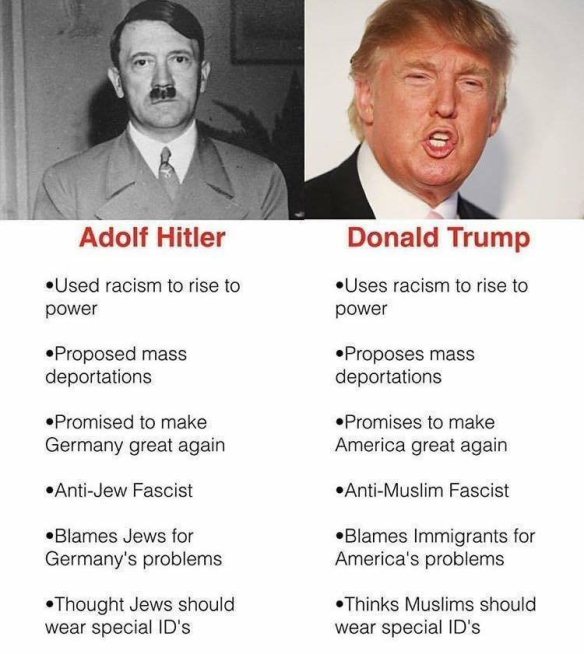 Are we — the citizens of this country — actually watching/witnessing the rise of the world’s next deadly Fascist movement?