In the video above you find a compelling explanation what Brexit is about really. Having watched some of the debates and quite a bit of coverage on BBC, ITV and a couple more news sites, I can fully agree with him. It is about immigration. And nationalism and then some immigration.

I’ll watch some of the BBC voting night coverage and will give you the first couple of developments live as they unfold. Then I will probably collapse, because I am not as young as I used to be when I joined you all for a night of music, booze and cigarettes on Music Night.

Whatever is the result tomorrow morning, I’ll let you know.

Fair warning: If they vote “Leave”, I will be seriously pissed off, because I still haven’t given up on the hope to spend my retirement in the North of England. I would have to go to Scotland instead, because the Scots will then leave the UK and reenter the EU.

Here’s a heat map of how Britons stand on the issue: 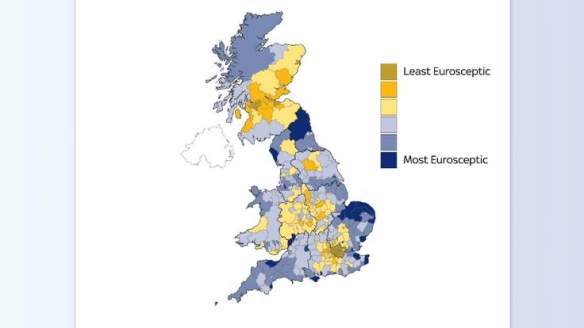 So let’s get started….and hope for the best.