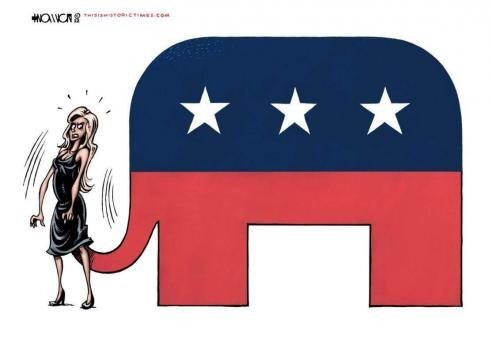 I have to admit it’s more than a little bit fascinating to watch as the REAL Donald Trump emerges from within the orange skinned and squirrel pelt hair version — not that the REAL one is any sort of an improvement, of course. What’s even more fascinating is to watch the intellectual devolution of various chunks of the Republican Party’s Trump supporters, to see how far down into the muck they’re willing to drop and still vibrantly support the ‘thing’ underneath the orange and the pelt. Big question: Just how far down the Trumpian path are his Trumpisstas willing to go? All the way to the end?

Here are a bunch of links to current articles that suggest there just may well be no limits, that all the way to the very bottom is, indeed, their principle option perfectly stated.

Evangelicals slammed Bill Clinton’s sexual misconduct. So why does Trump get a pass?

Dave Daubenmire: ‘We Cannot Vote For Hillary Clinton Because Women Are Not To Have Authority Over Men’

Trump: ISIS Will ‘Take Over This Country’ If Hillary Clinton Wins

Janet Porter: Trump’s Statements Don’t Matter Because Only He Can Save America From Becoming A Police State

On November 9th, Trump’s Followers Will Probably Be More Dangerous Than Trump

Those links seem to more-or-less summarize, overall, the collective attitude(s) of the portion of the political right that can be defined as totally intolerant. It includes the fundamentalist Christian segment, the white supremacist segment, along with the implicit attitudes embedded therein that Donald Trump, the current Republican candidate for POTUS, fully supports and urges forward

For some very very ‘mysterious’ reason, the focus of this, the current political situation underway in the United States, has reminded me of a scene from the 1961 movie, Judgment At Nuremberg — the scene in which German Judge and Tribunal Defendant Ernst Janning (Burt Lancaster) speaks to the Tribunal of the conditions in Germany that led to such horrible and bitter consequences. Here is Janning’s monologue (from the Academy Award winning script by Abby Mann; emphasis mine):

There was a fever over the land. A fever of disgrace, of indignity, of hunger. We had a democracy, yes, but it was torn by elements within. There was, above all, fear. Fear of today, fear of tomorrow, fear of our neighbors, fear of ourselves. Only when you understand that can you understand what Hitler meant to us. Because he said to us: ‘Lift up your heads! Be proud to be German! There are devils among us. Communists, Liberals, Jews, Gypsies! Once the devils will be destroyed, your miseries will be destroyed.’ It was the old, old story of the sacrificial lamb.

What about us, who knew better? We who knew the words were lies and worse than lies? Why did we sit silent? Why did we participate? Because we loved our country! What difference does it make if a few political extremists lose their rights? What difference does it make if a few racial minorities lose their rights? It is only a passing phase. It is only a stage we are going through. It will be discarded sooner or later. ‘The country is in danger.’ We will ‘march out of the shadows.’ ‘We will go forward.’

And history tells you how well we succeeded! We succeeded beyond our wildest dreams. The very elements of hate and power about Hitler that mesmerized Germany, mesmerized the world! We found ourselves with sudden powerful allies. Things that had been denied us as a democracy were open to us now. The world said go ahead, take it! Take Sudetenland, take the Rhineland – remilitarize it – take all of Austria, TAKE IT!

We marched forward, the danger passed. And then one day, we looked around and found we were in even more terrible danger. The rites begun in this courtroom swept over our land like a raging, roaring disease! What was going to be a passing phase became a way of life.

I haven’t made an exact count of the words one would have to change in order to bring Janning’s statement up to date sufficiently to describe the current and emergent politic in this country, but I’m guessing it would be no more than a dozen or so. Some of the substitutions are almost automatic: e.g. Trump for Hitler, America for Germany, Muslims for Gypsies, etc. But the saddest aspect of all, really, is that in Trump’s proposed America, There [will be], above all, fear. Fear of today, fear of tomorrow, fear of our neighbors, fear of ourselves. Only when you understand that can you understand what [Trump] meant to us. Are we as a people — Americans — willing to fall for that nonsensical ruse, the one that devoured both Italy and Germany in the last century? Is Fascism our goal, our ultimate destiny? FEAR? Are we on our way down that path?

I know it’s not politically correct to use the words Hitler, Nazi, Fascism, Republicans and Trump in the same document, but sometimes the urge becomes overpowering — esp. when piles of evidentiary foundations seem to be lurking ‘out there’ behind every bush. In any case, I’ve said my piece and will leave it to others to decide for themselves the direction the American right wing has taken, along with the possible (and likely) consequences the future will place on full display.