With the Senate’s Impeachment Trial of “donald john trump” beginning tomorrow, here’s some light reading to prepare yourselves regarding each team’s basic arguments, should you wish.

Okay, it’s not really “light reading” – well, the trump team’s “Answer” to the House impeachment managers’ “Trial Memorandum” was “light reading” as far as substance and credibility go. It’s also literally light in weight: at a mere six pages, maybe an ounce?, vs the weightier (in all aspects) 110-page House Trial Memorandum.

Since I haven’t actually read the House’s tome, let’s start with the trump team’s “Answer.”

“Ridiculous” is the best way to describe it, starting with its heading:

IN PROCEEDINGS BEFORE
THE UNITED STATES SENATE

Seriously, they won’t even use the word “impeachment” in the heading, as if not saying it means it didn’t happen.

The opening paragraph repeats the tired arguments that the Dems have been trying to impeach trump since his inauguration, and trying to “overturn” his election:

The Articles of Impeachment submitted by House Democrats are a dangerous on the right of the American people to freely choose their President.  This is a brazen and unlawful attempt to overturn the results of the 2016 election and interfere with the 2020 election – now just months away.  The highly partisan and reckless obsession with impeaching the President began the day he was inaugurated, and continues to this day.

It has already been argued by smarter people than me that, if an election were to be “overturned” (and the second paragraph also mentions “nullifying an election”), then the candidate who lost would become the winner, and all of the current president’s actions would automatically be null and void.  This idea is just as impossible as it sounds, and no one except an idiot would believe it.  Therefore, trump’s minions all subscribe to this notion.

The trump team’s arguments continue by stating that Article 1 of the Impeachment doesn’t indicate any “crime or violation of law whatsoever”, and claims that “At all times, the President has faithfully and effectively executed the duties of his Office on behalf of the American people.” At this point, they go into the so-called “perfect call” to Zelenskyy, trying to push that the call was about corruption and about other countries “not carrying their fair share.”

Here’s the fun part (and from this and other details included in trump team’s arguments, you can see why many say that trump had direct input or wrote some of this himself):

…the transcripts of the April 21 call and the July 25 call disprove what the Article alleges.  When the House Democrats realized this, Mr. Schiff created a fraudulent version of the July 25 call and read it to the American people at a congressional hearing, without disclosing that he was simply making it all up.”

Anyone who watched the first impeachment hearing knows that Chairman Schiff both preceded and followed his ‘mob’ parody of trump’s call with a disclaimer stating that he was paraphrasing.  Conservatives simply don’t get ‘irony’, ‘sarcasm’ or ‘satire’.

In trump team’s argument against Article 2 of the Impeachment, regarding obstruction of Congress, they state, in part:

…the notion that President Trump obstructed Congress is absurd.  President trump acted with extraordinary and unprecedented transparency by declassifying and releasing the transcript of the July 25 call that is at the heart of this matter. [emphasis theirs]

This is an out-and-out lie.  The actual “transcript” is still hidden in the ultra-secret server (gee, I can’t imagine why) and all we have seen is the call memo, which is damning enough.

Here’s one part that I really don’t get:

Following the President’s disclosure of the July 25 call transcript[sic], House Democrats issued a series of unconstitutional subpoenas for documents and testimony.  They issued their subpoenas without a congressional vote, and, therefore, without constitutional authority.

Huh?  AFAIK, a congressional committee doesn’t need a full vote of the House in order to issue subpoenas.  I have no idea whose ass this came out of, but it smells pretty bad to me.

You can read the rest of the trump team’s arguments and see for yourself how pathetic and, indeed, ignorant they sound.

Now the House’s “Trial Memorandum”: as I said, I haven’t read it yet, but here’s a brief synopsis from Raw Story.:

The document divides the argument by the House of Representatives into three points.

“The Senate should convict President Trump of abuse of power,” is the first section.

“The Senate should convict President Trump of obstruction of Congress,” is the second section.

“The Senate should immediately remove President Trump from office to prevent further abuses,” is the third section.

Raw Story also includes the outlines for the House’s arguments regarding each point.  If you’re like me, and watched or otherwise kept up with the impeachment hearings, their arguments should be familiar to you.

I’ll stop here in order for there to be time to read more of the details.

And while I was finishing up this thread, the House Impeachment Managers issued their own response to the trump team’s “Answer.” I should have waited a little longer! 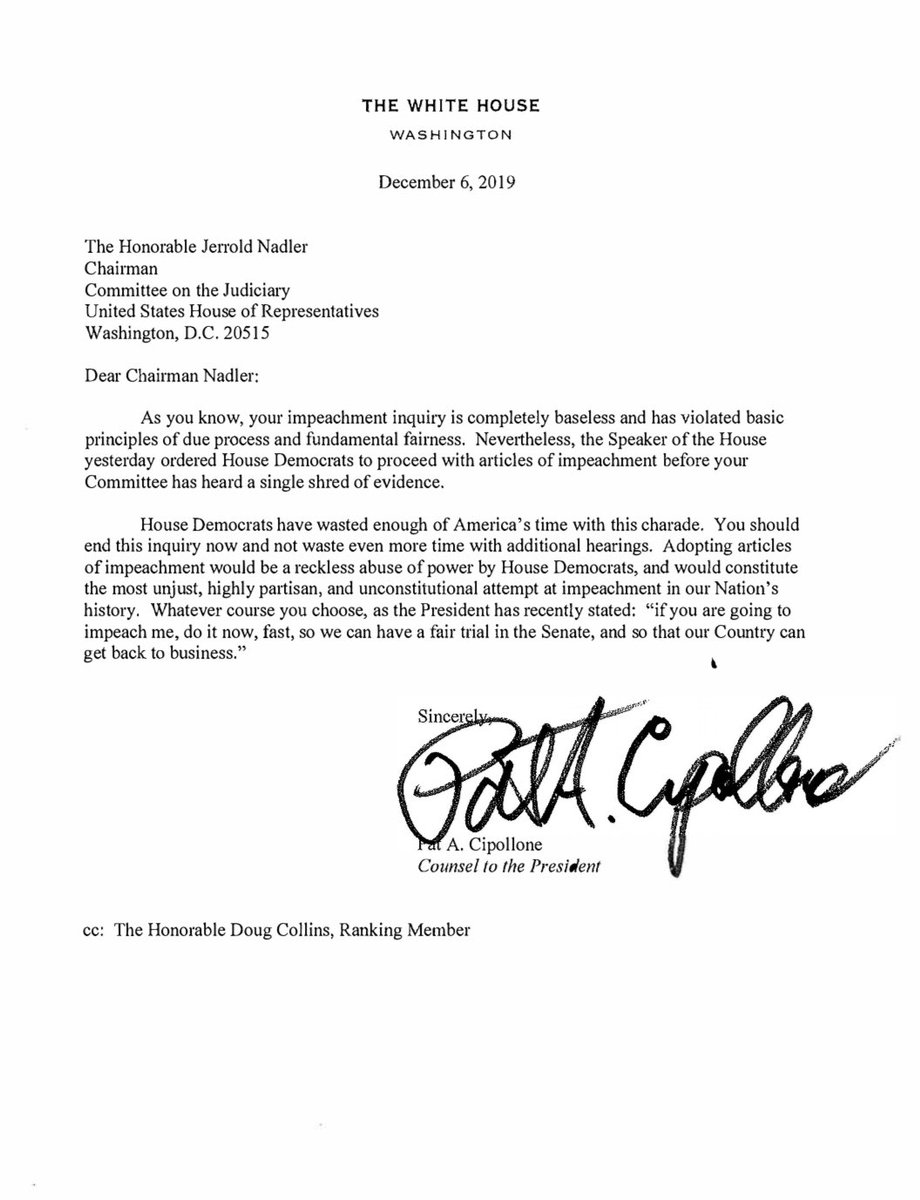 THIS IS AN OPEN THREAD – FEEL FREE TO COMMENT THROUGHOUT THE IMPEACHMENT TRIAL.