Even though I spend much of my day sitting at the computer gazing in despair at all of the continually horrifying headlines, I often end up turning instead to watch the various birds and squirrels enjoying our bird feeders.  Right now we just have two feeders:  one is set up about six or seven feet outside the computer room windows; the second is maybe fifteen to twenty feet beyond the first.  In addition, I sprinkle some seed under the feeders for the ground-feeding birds, plus I put a layer of seed on the bench on the back deck.

So far this season, the usual suspects have been hanging out each day:  cardinals, mourning doves, chickadees, titmice, sparrows, red-winged blackbirds, brown-headed cowbirds, blue jays, grackles, starlings, a family of groundhogs, and the ubiquitous gray squirrels.  In addition, we’ve had a couple of newcomers visiting recently – a male and a female turkey have wandered through separately, but only the female stopped to snack on the seed, and she’s come back more than once.  Red squirrels started encroaching on the gray squirrels’ territory last year, so I’m seeing a few of them in the last week or so.  And we’ve had another bird visiting that I’ve only seen once or twice before in my life, despite their supposedly being ‘common’ in our area: a rufous-sided towhee (aka ‘Eastern Towhee’), which looks like this:

I’ve been very pleased to see that, in addition to the smaller downy woodpeckers, a pair of red-bellied woodpeckers have become regular visitors, particularly enjoying ‘perching’ on the edge of the bench where the seed is easier to access than at the feeders.  A pair of them is shown in the brief video below – turn on the sound for both videos so that you can hear the birdcalls, most of which I’ve recognized for much of my life.

The few times we’ve been able to open the window, listening to the birds has been a distinct pleasure and distraction during this time of ‘shelter-at-home’.  And when I listen to them, I can’t help thinking about our dear departed friend Ebb (“ebb and flow”, “to ebb and flow”) and her love of all things “on the wing or under the sea.”  I miss her serene outlook, her insightful empathy, and her beautiful soul

This thread is dedicated to the memory of Ebb, whose spirit is flying free.

Open Thread – enjoy this little oasis whenever you need to.

Even though we’re all homebound for this holiday, I hope that a little ‘spirit of the season’ remains with everyone.

Little things like bunnies and chicks, daffodils, tulips, and hyacinths, can help to brighten things up –

This one’s from my brother Bobby and Wayne’s sister Judy:

And this one is from our niece Emily and her husband Michael:

Whatever way you celebrate, or if you celebrate at all, I hope that everyone has a special day!  And don’t forget how the tradition of the Easter Bunny started – 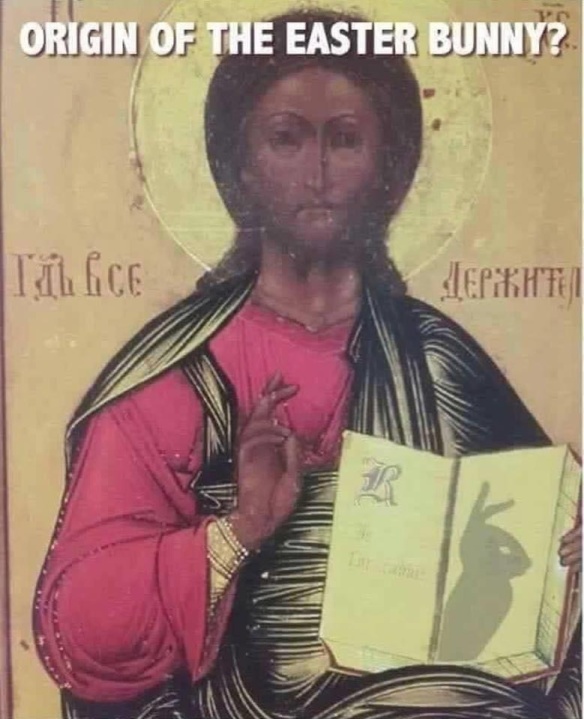 OPEN THREAD – HOP ON BY AND TALK ABOUT WHATEVER YOU WANT.