The Day of the Dead is a celebration held every year on November 1 and 2, mostly in southern and central Mexico, but celebrations are held all over the world — sometimes called “All Saints Day” or “All Souls Day.”  They are days to remember departed loved one, and celebrate their lives with prayer, food, flowers, and sugar skulls that bear the name of the departed on the forehead.

Traditions connected with the holiday include building private altars called ofrendas, honoring the deceased using sugar skulls, marigolds, and the favorite foods and beverages of the departed, and visiting graves with these as gifts. Visitors also leave possessions of the deceased at the graves. 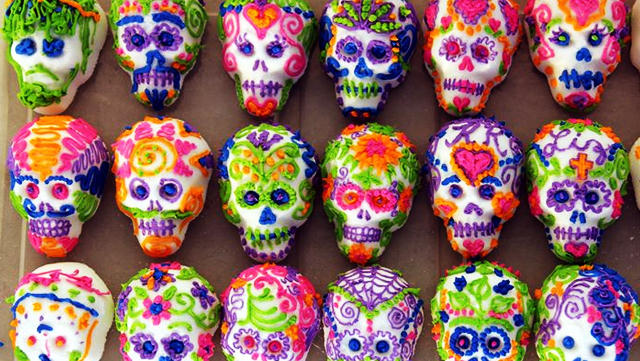 Although I have never visited a loved one’s grave after burial, and never intend to do so, I like the Day of the Dead because it’s a celebration of life, rather than a remembrance of illness, tragedy, and death.  And sugar skulls — which are amazing works of art!

This is our daily open thread — Don’t forget that annoying time change thing.

I found this on facebook, which found it on The San Francisco Globe.  Never heard of it before, but I haven’t heard of everything yet.  Heh.

I watched this video until my eyeballs went googley, and then I watched it some more the next day.  Here’s the info:

John Edmark is an inventor, designer and artist who teaches design at Stanford University in Palo Alto, CA. One of his latest creations is a series of 3D-printed sculptures designed with proportions corresponding to the Fibonacci Sequence. When Edmark’s sculptures are spun at just the right frequency under a strobe light, a rather magical effect occurs: the sculptures seem to be animated or alive! The rotation speed is set to match the strobe flashes such that every time the sculpture rotates 137.5º, there is one corresponding flash from the strobe light.

And now for something completely different.  To me, anyway!

I wouldn’t mind having him paint my bins, but I think I’d rather have him paint my car.  Prolly not classy, but it would be neato.

This is our daily open thread — What do all y’all think?

Wrap your head around this one!

Although it makes a weird sort of sense, to me anyway, that a mind in the midst of extreme suffering might perceive things in a different way than a calmer mind.  It is rather simplistic, but thinking about it that way feels good.

And now, a beautiful quote from one of my favorite episodes of Doctor Who, Vincent and the Doctor.

The Doctor:  Between you and me, in a hundred words, where do you think Van Gogh rates in the history of art?

Curator:  Well… um… big question, but, to me Van Gogh is the finest painter of them all. Certainly the most popular, great painter of all time. The most beloved, his command of colour most magnificent. He transformed the pain of his tormented life into ecstatic beauty. Pain is easy to portray, but to use your passion and pain to portray the ecstasy and joy and magnificence of our world, no one had ever done it before. Perhaps no one ever will again. To my mind, that strange, wild man who roamed the fields of Provence was not only the world’s greatest artist, but also one of the greatest men who ever lived.

Can anyone doubt that Vincent van Gogh is my favorite artist?

This is our daily open thread — Get on with it.

Just the other day I received something special, courtesy of my longtime friend and wildlife photographer, Denny Green. The only comments necessary are his own words: “I was lucky to be at the right place on Sunday to see this beautiful coyote calling to his friends . . . Quite a stimulating experience.”

Why do so many humans so often hate, detest, and fear such creatures? What is wrong with them? With us?

Imagine, if you will, that you’ve just begun driving across South Dakota, and you’re already cross-eyed because of the flatness.  Then, up ahead, you see a hill.  Wow!  This is interesting…cuz it’s a hill.

And on that hill you see something and think, “What the hell am I seeing?” Cuz you’re seeing this:

Whatareyagonnado?  There’s an exit ahead, and you gotta take it, which leads you to Porter Sculpture Park.

And he’s got vultures with bib, knife and fork…

I don’t know why, but I was smiling the whole time I was there.  🙂

“First light at Daytona brought in heavy fog.” Thank you, houseofroberts, for inadvertently (and somewhat circuitously) inspiring this post. Hopefully you’ll enjoy the respite from the perpetual political perturbations in this refreshing pool of nature’s glory and wonder.

After I read house’s comment yesterday morning, I went to TheWeatherChannel.com to check our forecast. After finding that it was just a chilly 7 degrees out – brrrrr! – I found my inspiration.

Let’s start with, appropriately, Sunrises. The first photo in the group, “…taken by johndhard at Smith Rock State Park in central Oregon…”, brings to mind the style of artist Maxfield Parrish, i.e.:

Feeling more human now? Then let’s learn a little about clouds, including, but not limited to “Hole-Punch Clouds”, as seen here: 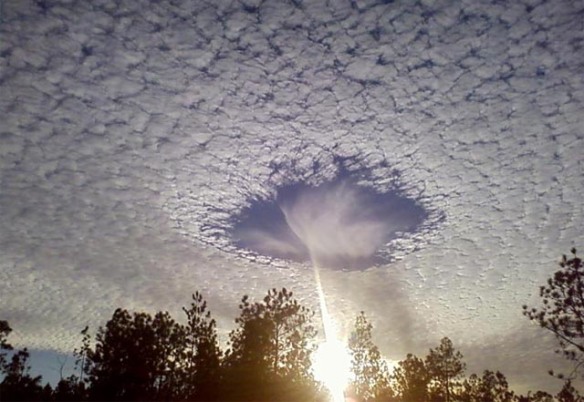 This is today’s open thread. Well, that was good for me, how about you? 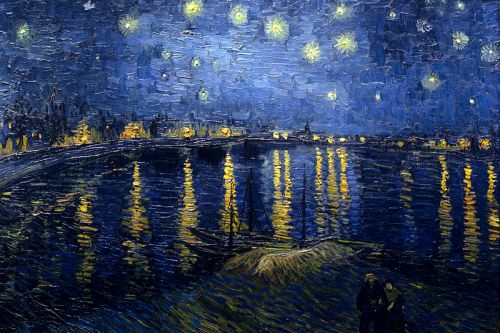 On this date in 1890, 122 years ago, the greatest painter who ever lived, in my humble opinion, shot himself in the chest.  He died two days later of infection.  There is some speculation that van Gogh did not shoot himself, that he was accidentally shot by a third party, or accidentally shot himself.  One thing is for sure, we’ll never really know.

Over the years, there has been a lot of speculation about what ailed van Gogh:

Diagnoses include schizophrenia, bipolar disorder, syphilis, poisoning from swallowed paints, temporal lobe epilepsy and acute intermittent porphyria. Any of these could have been the culprit and been aggravated by malnutrition, overwork, insomnia and consumption of alcohol, especially absinthe.

Whatever it was, van Gogh’s was a tortured soul.  I wonder if he would have been a better painter with a healthy mind?   Maybe, maybe not.  It’s my thought that our experiences — social, physical, and psychological — bring us to any given point in our lives, and everything we do is colored by those experiences.

For van Gogh, his experiences and talent led him to an amazingly productive period in his life, even as his mind was slipping away.  It seems he did the only thing he could do — paint beautiful pictures.

I used to think that our life experiences always brought us to where we needed to be, and that it was usually a good thing.  I no longer think it works that way for everyone, and I think Vincent van Gogh might agree.

This is our daily open thread — What are we drinking tonight?  🙂

Stumbled upon this juggling act and thought it would be an upbeat way to start the work week.  Enjoy.

This is our Open Thread.  What do you think?  Speak Up!

…I still miss his genius.

Expressionist painter, Edvard Munch, created The Scream, which was actually one of a series of paintings, in 1893–1910.

In a page in his diary headed Nice 22.01.1892, Munch described his inspiration for the image thus:

I was walking along a path with two friends — the sun was setting — suddenly the sky turned blood red — I paused, feeling exhausted, and leaned on the fence — there was blood and tongues of fire above the blue-black fjord and the city — my friends walked on, and I stood there trembling with anxiety — and I sensed an infinite scream passing through nature.

On this day in history, August 31, one of the versions of The Scream, along with another Munch painting entitled Madonna, were recovered by Norwegian police after having been stolen in 2004.  Both of the paintings suffered damage, but they were restored and returned to display in 2008.

This is our daily open thread — got something to scream about?

Remember this photo? Who doesn’t.

A former nurse who inadvertently became part of an iconic World War Two photograph when she locked lips with a celebrating US sailor has died, her family confirmed Wednesday.

Edith Shain, 92, passed away at her home in Los Angeles on Sunday, some 65 years after her passionate embrace with a serviceman celebrating the end of World War Two became one of the most famous photos in history.

Ms. Shain was interviewed by the NYU Alumni Magazine in 2007 in “A Kiss for the Ages”:

Edith Shain (STEINHARDT ’47) was working as a nurse at Doctors Hospital in New York City when she heard on the radio that the Japanese had surrendered and World War II was officially over. After her shift, she and a friend hopped on the subway to Times Square, where, in the flash of a camera bulb on the afternoon of August 14, 1945, Shain was unexpectedly captured in one of history’s most iconographic images.

Photographer Alfred Eisenstaedt, who snapped the famous kiss forLife magazine, was too overwhelmed by the crowd celebrating V-J Day to identify the couple, and there is still uncertainty about the sailor.

But Shain revealed her identity in 1980—to the surprise of her three sons, who never knew that their now 89-year-old mother was the woman so widely associated with romantic spontaneity. The former elementary school teacher, who moved to California after graduating from NYU, has been contacted through the years by a couple dozen men, all claiming to be her mystery sailor… (Continue reading)

It’s 71 years ago today that Orson Welles’  “War of the Worlds” was broadcast on the radio. The show was meant to be a Halloween program. It sure panicked some and made history.

Listen to it. At 3:40 into the program the fun really started. How would you have reacted?

Parts 2 – 7 below the fold. END_OF_DOCUMENT_TOKEN_TO_BE_REPLACED 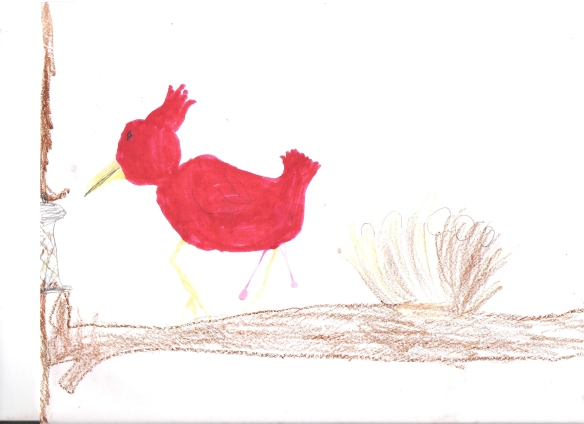 This is my low effort attempt to add an open thread for HoR on this day in the early hours. I do not know what those purple things hanging down are supposed to be and I did not dare ask the artist.