So, another day, another mass shooting. This one took place last night at the Macy’s store in the Cascade Mall in Burlington, Washington. According to the info on Raw Story’s coverage of the shooting, four women were killed while shopping in the Macy’s cosmetics department. The shooter, described as a young Hispanic male, is still at large, and no motive or explanation has yet been reported.

But already, the “good guy with a gun”-lovers are out there shooting their mouths off – and I honestly wish that were literally true, so we sane people wouldn’t have to hear their idiocy. One example is from a guy named Michael Parker whom I’ve argued with before on various ThinkProgress threads:

“Obviously we need more guns and fewer gun regulations. What could go wrong? Just suspend every one of the Bill of Rights except the 2nd Amendment and America will be great again.”

To which another gun-totin’ hero-wannabe replied:

“You are correct. That is PRECISELY what we need. Had there been a concealed carry weapon’s holder at the mall, like there was in Minnesota, the threat would have been neutralized. It’s stories like this PRECISELY why i carry a firearm.”

Apparently women shopping for cosmetics should only do so in states that allow the gun-carrying menfolk to protect the little ladies while they do so. Dog knows that going unarmed into Macy’s is just too fucking dangerous, so ladies, always expect the unexpected while you’re trying a new shade of lipstick–dontcha know, the real reason why there’s so many mirrors in cosmetics departments is so that we can scope out the folks behind us for possible shooters, not so that we can see how some silly makeup looks on us!

So, wait, how does this work with our big bad menfolk totin’ guns (concealed- OR open-carry) into a mall? As Bill Maher discussed last night – and Wayne and I have discussed before this – open-carry, at least, is quite honestly only safe for WHITE MEN to do. In an open-carry state, one probably won’t see too many men of color packing heat – or at least not for long, as SOMEONE will either shoot them ‘just because’, or report them to the police, who will come and shoot the ‘suspicious’ armed black man on sight.

As noted in the ThinkProgress thread, “There have been 353 mass shootings in the United States in 2016, according to the Mass Shootings Tracker.” C’mon, you crazy shooters, there’s still plenty of time left in 2016, let’s see how high you can make that number go before the new year! And you “good guy(s) with a gun”, Christmas shopping is just around the corner, and the malls will be packed, so get your gunz and ammo ready!

This is our daily Open Thread, so talk about gunz or whatever else you want.

Planned Parenthood is always under some kind of attack, whether by the religious-right forced-birthers protesting outside PP offices, or by the Republican-led legislature’s ginned-up witch hunts about fetal tissue, or by the many states’ impositions of prohibitively strict restrictions on both clinics and patients. This time, however, the attack was physical, violent, and deadly.

It’s nearly 3:30am Eastern Time as I’m typing this, and right now the most up-to-date information seems to be from the Denver Post. They’ve assembled a timeline of the more than five-hour shooting/standoff here. A third Denver Post article paints a more vivid picture of the unfolding situation, including this tidbit that I haven’t seen anywhere else:

“At roughly 12:15, the gunman went inside Planned Parenthood and began firing out the windows at propane tanks placed around the clinic’s parking lot, an officer told dispatch over his radio.”

Now, other articles mentioned that the police were sorting through several items that the suspect had brought with him, including mention of ‘a propane tank.’ Nothing about more than one tank, or that any were “placed around the clinic’s parking lot” – but that could explain why most articles say the shooting started outside the Planned Parenthood offices, in the parking lot. Supposedly [it was reported somewhere, I forget where] the suspect had been shooting at cars passing by, possibly if any of the drivers noticed what he was doing. But I’m just speculating here, which I shouldn’t be doing. That, apparently, is the job of the TV ‘news’ media. We turned on the TV after we initially read about the shooting as it was happening, but turned it off again after hearing some of the inane questions and ‘we-don’t-want-to-speculate-but-we-have-to’ bumbling.

Of course there will be much more information available by the time I wake up later this morning–hell, probably even by the time I finish writing this. So I’m definitely not going to speculate about the shooting suspect’s motive(s), or his religion, or his political persuasion; when the information comes out, I’m sure there will be much ranting to follow. I just need to get this one little rant off my chest before I finally go to bed:

“I mean it’s Nazi Germany,” he told Rockford radio station WROK recently. “You think of the doctors in the concentration camps experimenting on their victims. It’s kind of reminiscent of that.”

The fact that the ‘smoking-gun’ videos were proven to be fraudulent didn’t deter Kinzinger from throwing them up again, with amazingly tone-deaf, brain-dead timing. From one of the ThinkProgress articles covering the shooting:

“While the shooter was active inside the Planned Parenthood clinic, Rep. Adam Kinzinger (R-IL) went on live TV and blasted the organization. “We saw these barbaric videos, and that was something that many of us have a legitimate concern about,” Kinzinger said.”

Yes. He said that while the shooting spree was in progress; while police officers were being shot at; while at least 100 people were huddling in fear, not just in the Planned Parenthood offices, but in nearby shops and buildings; while a shooter terrorized the area. And he said it as if having “a legitimate concern about” Planned Parenthood could somehow be a “legitimate” cause or reason or excuse for shooting and killing innocent people.

This is our daily Open Thread–have at it.

I can’t bring myself to post about the environment or food politics.

The events in France just overwhelm. Can’t think of one fundamentalist religion that has ever done the world one bit of good, ever. It’s the 21st Century. You would think people would be beyond this now. It has been quite evident for some time that people can act morally and humanistic-ally without religion. I just don’t see the draw. 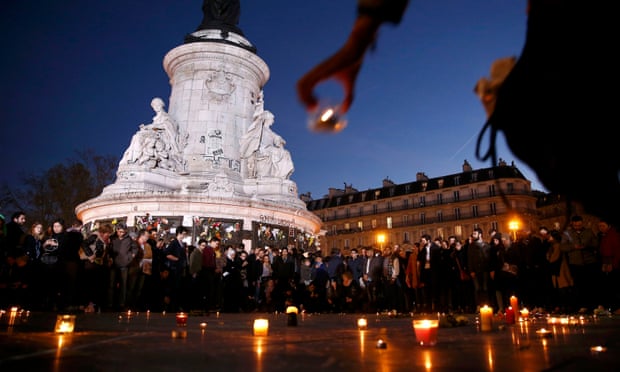 “What luck for rulers, that men do not think.”
~Adolf Hitler

When the wingnuts come out of their gun closets, hang onto your hats. Here are four of the most recent articles I’ve run across that very ably describe the depths to which insanity is capable of descending in the aftermath of yet another gun massacre.