Mitt Romney likes to say that “he can do that” or “that he can fix that” or “he fixed that in the past”.  This is always in relationship to the budget deficit.  Yet, it was tax payers money that saved Bain Capital not Mitt Romney.  He won’t talk about that.

Rolling Stone has the complete article which can be read here.

In fact, government documents on the bailout obtained by Rolling Stone show that the legend crafted by Romney is basically a lie. The federal records, obtained under the Freedom of Information Act, reveal that Romney’s initial rescue attempt at Bain & Company was actually a disaster – leaving the firm so financially strapped that it had “no value as a going concern.” Even worse, the federal bailout ultimately engineered by Romney screwed the FDIC – the bank insurance system backed by taxpayers – out of at least $10 million. And in an added insult, Romney rewarded top executives at Bain with hefty bonuses at the very moment that he was demanding his handout from the feds.

By now, unless you’ve been living under a rock (or, if you are among the more affluent, inside a cave), you’ve heard some kind of story about how Mitt Romney turned a private equity firm around and saved lots of jobs. But what you probably haven’t heard so much about is how he did it, and how he lied about it later. If you knew, you wouldn’t be so quick to want him to run our country the way he ran Bain. You see, Mitt didn’t really “save” the company by building revenue and new sources of income. No. In fact, his attempt to save Bain & Company was a disaster, and the only way Mitt “saved” the company and made himself the quarter-billionaire he is today is “by borrowing vast sums of money that other people were forced to pay back.” And if that wasn’t bad enough, his oft-told story about how he rescued Bain & Company has been proven, thanks to Rolling Stone reporters Tim Dickinson and Matt Taibbi, to be a lie. And just before his big speech at the RNC convention, Romney’s campaign told another lie about how he saved Bain & Company and made it profitable in a year.

It’s a fascinating, if long, story that sheds some light on how the world of high finance works, or doesn’t, depending on your perspective, by which I mean whether or not you are the one making the money or paying it. Romney’s basic strategy was to buy a struggling company, borrow hugely against the company’s assets, pay himself and his partners millions of dollars in consulting fees, then leave the company to twist in the wind under a mountain of debt, with many of them declaring bankruptcy, but not after Romney and his friends made a profit. Some people applaud this kind of Capitalism, but I feel there ought to be laws against it and protections for the people whose company is being bought. Perhaps the biggest lie Romney and his backers tell is that he was some kind of job creator who turned struggling companies around. But creating jobs was never the goal of taking over those companies. It was to make money for himself and his partners. As Matt Taibbi explains, “If you invest in a Bain or a Carlyle or a KKR takeover deal, you’re not betting on the future success of whatever company they took over. You’re betting on the ability of those firms to make money on the deal, which may – or, just as importantly, may not – involve turning the target company around.”

We do not need to have people like this in charge of the whole system, and choosing who will regulate the banks and financial institutions of our country. We need people we can trust to do the right thing, which is what Public Service is supposed to be about. It’s not about having a chance to change the rules to benefit you and your friends, though many have gone to Washington with just that goal in mind. It’s about serving your country, which includes all of its citizens, not just the top one percent in income. I would take the job, but an atheist like me could never get elected in this God-loving country. Maybe you or your children can do better (assuming the country is still around when your children are old enough to become president.)

This is our open thread. Feel free to discuss any topic you want.

Once again, Tweeter, The Zoo’s premier investivative journalist, is first on the scene and first with the news of Presumptive Presidential Candidate of the Republican Party, Mitt “Corporations are People” Romney’s Vice Presidential Pick.

Sources closest to the candidate revealed Halliburton was going to get the nod. It was a tough call, as the choice of potential running mates eventually narrowed down to just three: Academi, formerly Xe, formerly Blackwater; Bain Capital; and Halliburton.

Academi, a favorite with the gun crowd and evangelical christians, was felt to be a little too militaristic. Romney’s fears they might pull of a coup finally scratched the paramilitary force. It was also thought that with its frequent name-changes, it has lost its once-famous brand recognition. “People know and love Blackwater. But the meme at least since the days of Reagan have been to distrust Academia.” one source commented. In the end, it was decided to keep Academi on the side, perhaps reserving a cabinet post for the Corporation.

Bain Capital was Romney’s favorite going into the selection process. But backgrond checks revealed Corporate plans to leverage a buyout of the Executive Branch. Negotiations ensued regarding Romney’s golden parachute from the buyout, and whether he could enjoy his term to completion, then retroactively give up the Presidency to Bain Capital. Negotiations broke down, however, when Romney insisted he be given Rhode Island as part of his severance.

That left Halliburton. It is well-connected, has loads of foreign policy experience, and has an added plus of the backing of former VP Dick Cheney. The fact that it is now headquartered on foreign soil didn’t seem to bother the Presumptive Presidential Pick. “Lot’s of Americans live overseas. I don’t see why we should treat Halliburton any different than any other red-blooded American Patriot.” Romney was reported to say.

Unfortunately, just minutes before Romney was to make his historic announcement, Halliburton called and declined. “I took a long, hard look at the balance sheet, and untimately concluded that it wouldn’t be profitable, on a cost-benefit analysis, to be tied up for 4-8 years as VP.” Halliburton reportedly told Romney in a call to his cell phone just before he stepped on the stage to announce his pick. “I’m hoping to be named Secretary of Commerce.” Halliburton told reporters later.

Shaken by this last-minute turn of events, Romney approached the podium where he promptly introduced Paul Ryan as the next President of the United States. And, with that slip of the tongue, Paul Ryan became Mitt Romney’s VP Pick.

THIS IS OUR OTOTD. (OPEN THREAD OF THE DAY)
ENJOY

I didn’t quit when I said I quit, but after I quit I decided I quit, so I quit, effective the day I said I quit but didn’t really quit until I quit later.

Mitt didn’t quit
So he’s havin’ a fit,
of the truth there’s not a grain
when he talks about Bain,
What a pain,
What a drain
On the brain,
This Bain.
Mitt’s bane.

So Mitt,
just quit
with your lies
to disguise
‘cuz we realize
you despise
anyone who’s not like you,
not white,
not rich,
not a man. 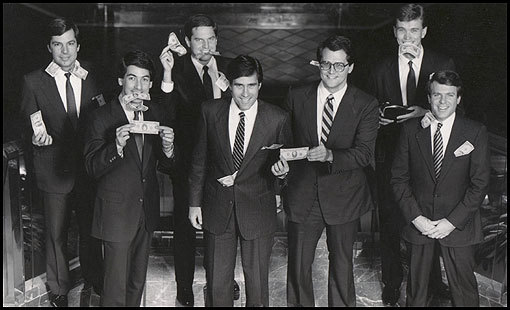 After seeing the above Mitt Romney photo for about the 100th time (this time accompanying a thread at TP), I decided to refresh my memory as to the origin of the photo. Checking a couple of search results, I noticed this, from the National Journal:

“Asked on Fox News Sunday about a whimsical [“whimsical”?] black-and-white photo of Romney and his colleagues at a private equity firm smiling and posing with money in their pockets, hands and teeth, Romney explained that the image was taken after they won their first round of investment, which he said was roughly $37 million.

“We posed for a picture to celebrate the fact that we raised a lot of money,” he said, adding that he anticipated the photo will surface repeatedly in the election if he becomes the Republican nominee. “I know there will be every effort to put free enterprise on trial,” he said.

Asked whether President Obama might try to paint him as Gordon Gekko, the famous corporate raider from the 1980s movie Wall Street, during a general election matchup, Romney said he anticipated just such a move.

“Of course he will,” Romney said, “in part because he has been the great divider.”” 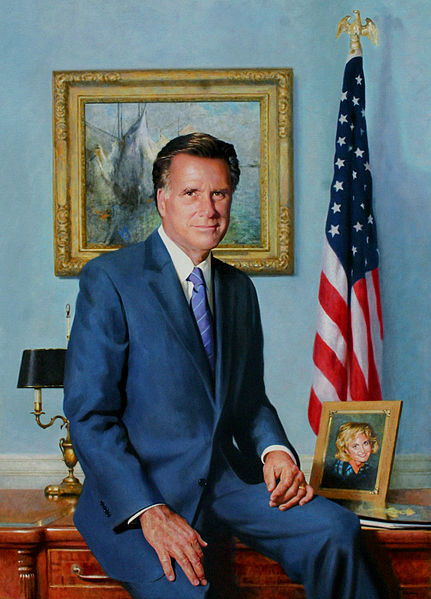 In my search, I also ran across an ad in the Boston Globefor a book about Mitt Romney, written by two of the Globe’s writers. Here’s a couple of teases from the ad:

Chapter 9: The CEO governor: “his campaign produced television ads designed to preemptively beat back any Democratic attacks. It was a lesson learned from the Kennedy onslaught eight years earlier, which had typecast him as a heartless corporate raider. This time Romney would define himself, instead of letting his opponent do it for him.”

Chapter 10: Health care revolutionary
It was a sunny October afternoon in 2008, and Mitt and Ann Romney were making a return visit to the Massachusetts State House to meet with the portrait artist Richard Whitney. Together they walked to the third-¬floor office Romney had once occupied, its broad windows offering expansive views of the Boston Common and bustling downtown. Whitney needed photos to paint Romney’s official portrait. Romney had been clear about the image he wanted to convey for posterity. Wearing a blue suit, white shirt, and striped tie—the dress uniform of a businessman—he would be sitting on his desk in front of an American flag, next to symbols of two things he held dear. The first was a photo of his wife, the center of his personal universe. The second was the Massachusetts health care law. “He wanted to be remembered for that,” Whitney said.

Apparently RMoney only wanted to be remembered for his historic health care law for as long as it was politically expedient, i.e., until President Barack Obama touted “Romneycare” as a basis for the Affordable Care Act, aka “Obamacare.” Now, of course, RMoney says that repealing “Obamacare” is on his Day-One “To-Do” list upon his inauguration.

Meanwhile…an article in yesterday’s Boston Globe describes RMoney’s relationship with Michael Milken, the junk bond king – a relationship that continued even while Milken was being investigated for insider trading.

So, which image of Mitt RMoney do you think with be remembered by posterity?