When I saw the first photo on TP last week, I thought “That just begs for a caption contest.” The photo is of Mississippi State Senator Chris McDaniel, and is credited to McDaniel for Senate. McDaniel allegedly hired a pastor to hold a press conference and state that he (the pastor) had been paid by Thad Cochran’s campaign to get black Democrats to vote in their Republican Senate primary: 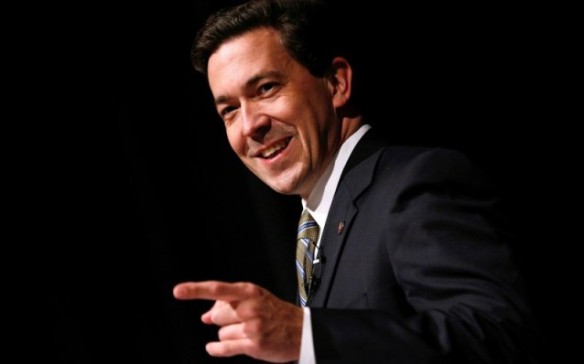 Next, from an article by Neil Cavuto on Fox Business, in which Cavuto surprisingly says:

“…cross them once, go off-script with them once, pose one different question or surprise confrontation just once – and they go nuts, and I mean really nuts. It’s actually disturbing.”

Chris Christie and Rand Paul have a lot going for themselves. They’re political originals in almost all respects, save their uncanny lack of self-awareness. It just seems odd for gentlemen who demand respect, they have a devil of a time “showing” respect. Their rage is as consuming as it risks being self-immolating. No slight is too small, no diss too dizzy, no criticism too silly, that each doesn’t get silly, and childish, and boorish in kind. Not kind. Not right. Not big. Not…presidential.” 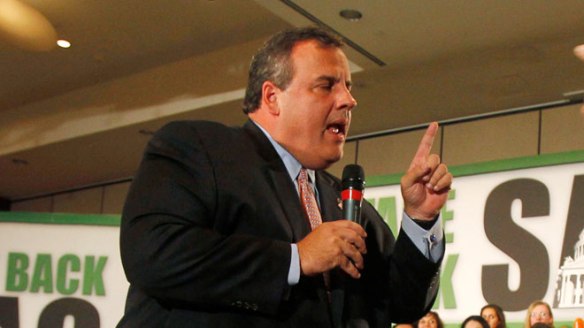 Rand Paul with wings and sword

And another two-fer, Ted Cruz and Rand Paul: 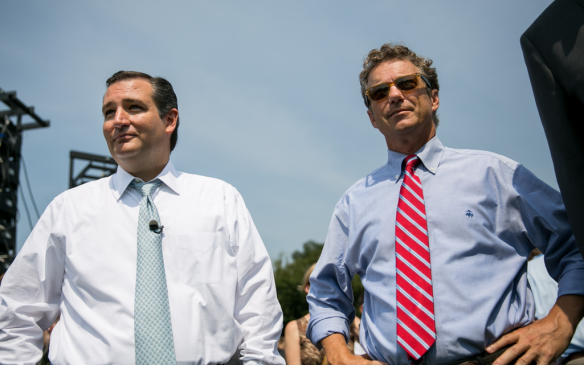 What is Tucker Carlson dreaming about when he fell asleep on Fox & Friends?:

Last, here’s a shot of Lindsey Graham (fundraising at a place called River Rat Brewery.) Lindsey, on Fox News yesterday, sounded the alarm about terrorists attacking the U.S. He then swooned, clutching his pearls, saying “Someone fetch me mah smelling salts!” 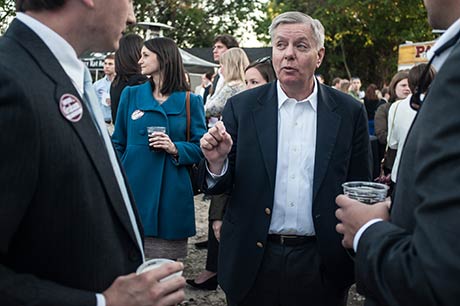 And just for fun (if you aren’t having any yet), here’s a gif that I ran across while choosing a photo for Lindsey Graham:

This is our daily open thread–what’s on your mind today?

In this episode of The Colbert Report with Stephen Colbert, President Obama celebrates at the Lincoln Memorial, Sen. Jon Kyl rounds up abortion statistics to the nearest 90, and “Fox & Friends” explains why there’s no need for Planned Parenthood.

I can’t believe Stephen was able to keep a straight face as long as he did.. If I’d have had a beverage in my hand, and was drinking from it, it would have shot straight out my nose!

Colbert, once again on a roll, followed up with this amazing piece of work:

Jon Kyl Tweets Not Intended to Be Factual State…, posted with vodpod

I’m afraid Jon Kyl will need to change his name after this. This was so “OUT THERE”, he’ll never be able to live this down. If you don’t believe me, check out this Twitter page! I’m afraid this man has lost ALL credibility.

It is simply amazing to me how loose and free some of these Republicans are with the numbers.. and the truth for that matter. It’s embarrassing.

UPDATE: I guess I should have mentioned that all this kerfuffle was about a ‘mis-statement’ (well, gross exaggeration) that Senator Jon Kyl (R-AZ) made on the floor of the Senate while arguing for a ‘policy rider’ to the funding bill that would defund Planned Parenthood. In his argument, he made the false claim that over 90% of what services Planned Parenthood provides goes for abortions.

It wasn’t entirely accurate.. Only 3% of services provided by Planned Parenthood go towards abortions, and zero percent of those are paid for by tax dollars. When called out for his enormous error in math, and in an attempt for Kyl to walk it back, a statement from Senator Kyl’s office was released and reported on by CNN including this little catchphrase: “His remark was not intended to be a factual statement..”

Stephen Colbert took Kyl to task for it in these videos. Colbert then started the Twitter craze. This won’t be forgotten any time soon.

Media Matters nails Fox News three times yesterday for false assertations.  Do they honestly believe no one is listening or checking the facts?  In this age of YouTube, Media Matters and FactCheck.org nothing usually slips by without someone catching you lying on tevee or the radio.

Gretchen Carlson was the first one they caught, no surprise there.  The Fox and Friends Show is always making ludicrous claims that they try to pass off as facts – in there so called Fair & Balanced reporting.

Fox News’ Gretchen Carlson falsely claimed that “roughly 40 percent” of Sen. Barack Obama’s plan to cut taxes “is a handout to people who do not pay taxes.” In fact, all American workers are required to pay taxes on their wages for Social Security and Medicare, and according to an Obama economic adviser, “every person that receives a tax cut under Barack Obama’s plan is working.”

Next up Brit Hume, the GOP cheerleader, and Gretchen yet again – repeated a report of Sarkozy comments about Obama, without noting French Embassy dismissed report as “groundless”.