The hairstyle is the giveaway. Michelle Obama is a secret agent for Control. 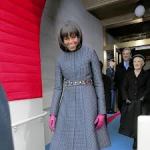 Part I – She is such a great First Lady!

Ted Kennedy, “You have inspired a new generation of Americans and your own example and your own call has recognized that.”

Calling on Americans to volunteer, President Barack Obama signed a $5.7 billion national service bill Tuesday that triples the size of the AmeriCorps service program over the next eight years and expands ways for students to earn money for college. “What this legislation does, then, is to help harness this patriotism and connect deeds to needs,” said Obama, a former community organizer in Chicago.

Michelle Obama drew an incredible crowd who wanted to just catch a glimpse of our First Lady.  She gave an inspiring speech at a London Girls School, after which they literally swarmed her for handshakes and hugs.  Michelle is taking London by storm.

President Obama and the First Lady arrive at Buckingham Palace and were granted a private audience with Queen Elizabeth II.

Michelle Obama announced that she would be planting a vegetable garden on the South Lawn, and digging began in earnest on Friday.

This is the first vegetable garden at the White House since Eleanor Roosevelt’s victory garden during World War II. Though there are 18 acres to play with, no White House resident since has had the urge to dig into the dirt and, with a little hard work, enjoy the delight of harvesting peas and tomatoes off the vine.

Why are the Obamas the first in more than 60 years to put in a vegetable garden?

Read on to see what others had to say about this…

Happy Birthday to you....

What a terrific birthday gift — for her and US — First Lady of the United States.

Our next First Lady, Michelle Obama has a message for us. With the Obamas, it is never about “me.” It is always about “us” and “we,” a true American message.

Barack Obama and his wife Michelle appeared on 60 Minutes in their first post-election interview. For the complete transcript, go here.

From kisses and hugs to casually draping their arms across their kids and carrying them around, here are some of the moments – caught by the AP and Getty – of the Obamas baby love throughout the years.

Not only does this make me extremely sad, but also disgusted.  I’m amazed Michelle Obama has held up as well as she has.

We have seen time and again the pure venom that Palin spewed at these rallies – and how out of control, near lynch mob atmosphere, most of these events became.  John McCain waited way too long to put the brakes on Palin and tone down those rallies.  Because of her hateful attacks on Obama’s patriotism, it provoked a spike in death threats against the future president, Secret Service agents revealed during the final weeks of the campaign.

The Republican vice presidential candidate attracted criticism for accusing Mr Obama of “palling around with terrorists”, citing his association with the sixties radical William Ayers. But it has now emerged that her demagogic tone may have unintentionally encouraged white supremacists to go even further.

The Secret Service warned the Obama family in mid October that they had seen a dramatic increase in the number of threats against the Democratic candidate, coinciding with Mrs Palin’s attacks. Michelle Obama, the future First Lady, was so upset that she turned to her friend and campaign adviser Valerie Jarrett and said: “Why would they try to make people hate us?”

END_OF_DOCUMENT_TOKEN_TO_BE_REPLACED

On Tuesday, Americans stood in lines that stretched around schools and churches in numbers this nation has never seen. It didnt matter who they were or where they came from; what they looked like or what party they belonged to they came out and cast their ballot because they believed that in this country, our destiny is not written for us, but by us. We should all take pride in the fact that we once again displayed for the world the power of our democracy, and reaffirmed the great American ideal that this is a nation where anything is possible.

This week, I spoke with President Bush, who graciously offered his full support and assistance in this period of transition. Michelle and I look forward to meeting with him and the First Lady on Monday to begin that process. This speaks to a fundamental recognition that here in America we can compete vigorously in elections and challenge each others ideas, yet come together in service of a common purpose once the voting is done. And that is particularly important at a moment when we face the most serious challenges of our lifetime.

END_OF_DOCUMENT_TOKEN_TO_BE_REPLACED

A hospital in Kenya reports six Obamas, two Michelles and one Baracka after the U.S. election.

A Time magazine photographer shares her insights and views of the next first family.  It is a very touching look at the Obama family behind the scenes.

The obvious winners are Barack Obama, Congressional Democrats, all the volunteers that worked hard to make this dream a reality and the progressives that wanted this change so badly.

Politico has highlighted the winners and losers of this campaign election.  I agree that the verdict on the victors will come not from a single night of election returns but from the actions the winners take to remedy the nation’s economic ills and extricate it from two long and costly wars.

President Bush. The  worst President in history.  The debt, deregulation, the two wars, and his unpopularity helped doom John McCain who voted for Bush policies 90% of the time.

Steve Schmidt. McCain’s main strategist was brought in after a shake-up to hammer Obama hard every day, and he did that with gusto, hatching the highly effective “Celebrity” ad equating Obama with Paris Hilton. Schmidt’s mid-campaign testosterone boost turned off independents, young voters and women. Meanwhile, the base never believed the Arizona senator was one of their own – even when Schmidt succeeded in persuading McCain to choose Sarah Palin as his running mate.

Rudy Giuliani. America’s mayor began the year as the Republican front-runner by making the case for the big-tent GOP approach. He ended it as a caustic Republican attack dog at a time when GOP partisanship has turned off the very independents Giuliani initially attracted.

Bill Kristol. The former Republican White House aide-turned-New York Times columnist was one of the loudest voices in favor of invading Iraq. And he was among the first to suggest Palin could be McCain’s savior. It proved to be a brilliant move. For about two weeks.

END_OF_DOCUMENT_TOKEN_TO_BE_REPLACED

I wish I could say this wasn’t true,  but unfortunately Tampa Bay Online is reporting that Al Austin – Florida Finance Regional Co-Chairman – is circulating an email joke that refers to the assassination of Obama and his wife.  This posted by William March.

Al Austin, a longtime, high-level Republican fundraiser from Tampa, today sent to his list of political contacts an e-mail containing a joke that refers to the assassination of Barack Obama.

When asked about the e-mail, Austin said it was a mistake and apologized and that he wouldn’t knowingly have circulated it. He said he planned to send an apology and retraction to the same e-mail list.

END_OF_DOCUMENT_TOKEN_TO_BE_REPLACED

This is the same despicable congressman that wrote a letter in December 2006 stating: “[I]f American citizens don’t wake up and adopt the Virgil Goode position on immigration there will likely be many more Muslims elected to office and demanding the use of the Koran,” the letter reads. “I fear that in the next century we will have many more Muslims in the United States if we do not adopt the strict immigration policies that I believe are necessary to preserve the values and beliefs traditional to the United States.”

With right-wing nut jobs like Goode-representing the state-we could only be so lucky if they crash and burn in the election. Republicans fear that McCain’s prospects for winning a state that has been in the GOP column in every presidential election since 1964 could be in jeopardy.  Politico notes:

With Barack Obama treating the Old Dominion like a battleground state and reliable polls showing a margin-of-error race there, some are cautioning that McCain is making a critical mistake by allowing the Democratic nominee to outpace him in terms of visits and resources committed.

END_OF_DOCUMENT_TOKEN_TO_BE_REPLACED

Some of these might overlap but they’re all inspiring.

Here’s a LINK to NPR’s audio and transcript although it seems the very beginning of the speech is missing.

‘Isn’t That The Great American Story?’

‘Michelle Obama on values that shape her and Barack’

By now everybody has heard Michelle Obama’s comment about being proud to be an American. Here’s the first version where she says “really proud”. In many versions on You Tube the “really” has been edited out, sometimes not so successfully.

Media Matter has the complete statement Bill O’Reilly made.

O’Reilly: “I don’t want to go on a lynching party against Michelle Obama unless there’s evidence, hard facts, that say this is how the woman really feels”

But it is this nonsense that makes me less than proud to be an American and people like Bill O’Reilly who make me ashamed to be a white person. If Bill O’Reilly wants to start race wars in this country I say, “Bring it On” right to his front door.