I can’t believe it’s JUNE!  This calls for some totally random tunes, right?

Our friend, Gary Herstein, suggested holiday “songs that don’t make you want to put out your ears with an ice pick,” which I think is a perfectly reasonable request.

Be warned!  If anyone posts that stupid grandma/reindeer song, I will find a way to hurt you.  🙂

Having gotten that off my chest, have fun all y’all!

Getting an early start today!  Our own Gary Herstein came up with this idea, and maybe it will inspire an earworm or two.  😉

Such a sexy song…

This country is resembling a clusterfuck every single damn day:

“ObamaCare, MediCaid, MediCare, Section 8, food stamps, heat assistance, etc., are socialist programs and the most horrible things that ever happened on the planet!”  Seriously, I worked hard for my trust fund/inheritance, and only took a piddly million dollar loan from my dad once or twice.  You losers need to get jobs.

I could go on, but you get the picture.  WHAT. ABOUT. US?

Been listening to  a lot of Pandora while converting our garage to a living space, set to the “Road Trip” station. Cats and I will be going on one on March. They play a lot of Credence on the Pandora set. Good choice.

Just to clarify:  I maintain a reputation for music posts with Truly Crappy Music ™, but I’m branching out tonight.

Fun fact:  All music played while wearing a kilt is high quality stuff.  Don’t argue with me!

Good god, it’s not even the worst I could find…

Do your best, Zoosters.

A fishing colleague from back east had this group posted on his Facebook page. Roots music worth a listen from the Jamacian senior citizen set.

I’m the substitute music night poster, so all y’all can get away with murder.

Get on with it.

It does not require many words to speak the truth.

Since nonewhere has been spending the week packing up his office space (I call him ‘last minute louie), I decided to give him a break and get the music started.  We will be seeing a lot of this during the next several days.  By the way, we will be spending some vacation time in Northwest Colorado where nonewhere will be fishing with Onefly.

I heard this song on WXPN yesterday and it made me laugh because the typewriter is certainly a thing of the past.

Once again, Nonewhere was a slacker so the privilege of posting a song was   handed to me.

This is all I got.  Do whatever you want with it.

BTW – WXPN may be one of the best radio stations in the nation.  Do visit their website to learn more about ‘XPN‘.

Once again, Nonewhere asked me to get tonight’s music started.  Since this was asked of me at 8:00 am today, I was lost for ideas so I contacted my oldest daughter.  Next week, she and her husband will be seeing this group in concert.  From what I understand, this group is becoming quite popular and that is why I am posting music from these up and coming artists.  For all I know, they may already be famous.

May I present to you, The Lumineers performing Ho Hey:

I think I like this group.  They are fresh and exciting.

Here’s a link to their bio.

Are you listening to any new performers and if so, who are they?  There are so many new artists to choose from.

Depending on who you ask, all men are assholes, or most men are assholes. So when a typical guy doesn’t get the relationship to work the dialogue goes something like this:

So to prove the theory that only most men are assholes, I offer two who are not, singing about man pain in the most evocative, visceral moods of anguish and eloquence.
Jimmy Dale Gilmore doing a Butch Hancock song Just a Wave Not the Water.

And here it is, your Friday tour of the musical raging rapids, quiet pools, and swirling eddies of YouTube’s music collection. Gummitch, probably against his better judgement, has handed the MC’s mouse to me, TerrytheTurtle.

So enough bunny from me, let’s get going.

Each week I try to find music to tie to what the GOP thinks should be voted into one of the most powerful positions that the Koch brothers have in their subsidiary, which some of us remember as the United States of America. Anyhow getting new material each week is a challenge, but I’ve been working hard and here we go:

Herman Cain hit the Big Time this week and shot to front of several polls with his $9.99 pizza offer, catching eyes and turning heads. You have to hand it to him, he simplified the complex tax code to a question of Apples and Oranges or Bananas.

Ron Paul was there again, the ‘old man on the back porch’ of the field. He even dug up Ronnie’s corpse, and told the assembly some painful hometruths – the stunned silence was epic.

Batshit’s campaign is fading fast. Of course Ozzy Osbourne knows a thing or two about bats (and how they taste), and also about ‘going off the rails on a crazy train.’

Mitt Romney – OK the cult thing is easy.  How about ‘more cowbell’ with it though?

So Cult Boy and Gov Jeff Davis got into it about immigration.  Here’s the Viking Kittens and the Immigrant Song for Rick ‘Purdy-mouth’.

And can anyone tell me why Newt Gingrich is still there? Wonder when his next divorce is due. His penchant for serving his ex-wives as they lie in hospital beds wins him this one. Barenaked Ladies from their widely acclaimed ‘Bathroom Session’ – ‘The King of Bedside Manor.’

Last, but by no means least, well ok, he is the least of the clowns in the GOP clown car, Rick Sanitarium. I thought I would have trouble with him, I mean finding a song to piss him off, maybe where a band named as slang for a transvestite, with a gay guy for a singer, belting out a song hinting about bondage with an Oedipus flavour…you’d think would be impossible. ‘Au contraire, mon capitain!’ as Q would say.

But you know I think I’ve figured out what the vaguely uncomfortable look that comes over Rick’s face is when he’s thinking. He’s thinking that someone, somewhere, right now is having sex – and he isn’t – ‘lust keeps on lurking.’

Enough of these fools! Big news of the week, the Mad Dog of the Middle East is dead. I had to go back to the drawing board after ‘Another One Bites the Dust’ was posted yesterday, but I redoubled my efforts and came across a detail in the story, where the young Libyan who found him in the culvert, relieved him of something.

Colonel Gaddafi – among his many delusions, apparently thought he was ’The Man with the Golden Gun.’

But finally, for the Libyans themselves, we all know which casbahs are rocking tonight! Hit it Joe! 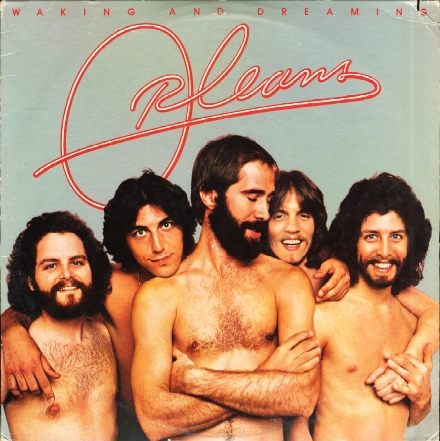 I found a link to the 10 Worst Album Covers of All Time on facebook, and sent it to Gummitch for use in future Music Night genius-ness.  I’m not sure why he wouldn’t touch it with a ten-foot tone arm.  Heh.

Here’s Salami Tsunami’s caption for the above album cover:

Hey guys, I think you got your album title mixed up with the Ministers Quartet up there. By the way, if I ever ‘wake up into a dream’ where I am surrounded by a bunch of naked male hippies, it had better be the result of a toxic snakebite and/or a fever-induced coma. Again, I have to ask the obvious question; who decided that an album cover featuring hairy naked dudes would sell music? Especially when some of the guys look way too happy, while a couple are noticeably uncomfortable. They snapped the picture when the guy in the middle was saying, “Hey, Julian, we aren’t all like you and Viceroy. Where is your other hand? I need to see them both. That was the deal.” I have no idea what this music is like, but at least we know where boy bands came from.

*snerk*  That is just so wrong!

Erm, what was I talking about?  Oh yeah, Music Night — Enjoy!

Knock yourselves out, Zoosters.  🙂

I know, I know, it’s not Friday!  But it’s New Year’s Eve and there’s a blue moon, so it’s a perfect night for music.

Nat King Cole sings The Christmas Song — one of my Mom’s favorites.