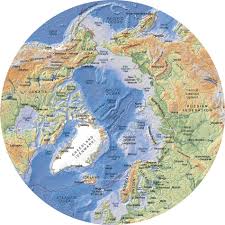 The melting of Polar Ice makes the Arctic much more accessible than it used to be and with accessibility comes the greed for oil. Some 30% of undiscovered gas reserves and 13% of undiscovered oil are thought to be under the arctic ice. Now the race has begun. The risk, however, is huge:

Any serious oil spill in the ice of the Arctic, the “new frontier” for oil exploration, is likely to be an uncontrollable environmental disaster despoiling vast areas of the world’s most untouched ecosystem, one of the world’s leading polar scientists has told The Independent.

Oil from an undersea leak will not only be very hard to deal with in Arctic conditions, it will interact with the surface sea ice and become absorbed in it, and will be transported by it for as much as 1,000 miles across the ocean, according to Peter Wadhams, Professor of ocean physics at the University of Cambridge. (read more)

The exploitation of oil reserves has become more and more frantic. Voices calling for getting renewable energy off the ground were ridiculed when oil was relatively easy to be had, now because those voices went unheard we do not have an alternative at the ready.

This is our Open Thread. Spill! Your thoughts on this and anything else are most welcome.