Hard to top Wayne’s cute animal post from yesterday, but I’ll follow with a gorgeous places one to see where it goes. A picture is worth a thousand words.

Pangong Tso Lake in the Himalayas

From the NY Times –Donald Trump on the Environment:

He does not just deny that climate change is occurring; he calls it a hoax, and says those who warn of global warming only want to raise taxes. He is less outspoken on other environmental issues, though he sued unsuccessfully in 2013 to block plans for wind turbines in Scotland that would power 65,000 homes, arguing, in part, that they would mar the view from a golf course he was proposing to build.

Per Mother Jones – Mike Pence on the Environment:

“Global warming is a myth.”

Two peas in a pod.

In place of the usual environmental or food politics post, let’s have a conversation about the future (because the present seems so awful at the moment). I think the presumptive nominee Hillary will be our next president. Aside from filling Supreme Court vacancies (and I hope she picks a couple of brainy 13 year olds), we all know that unless she has a house and a senate, we are in store for more gridlock. Is Trump so awful that Republicans will be no-shows, and as a result, will Dems carry the day across all open seats?

Will there be a measure of gun sanity in our future?

A coal company wants to blame Obama for a 21% cut in workforce, when in reality it is fracked natural gas that power companies are shifting to.

My grandfather who I never met died when my mother was a child of black lung disease. It is an occupation that I would not wish on anyone. Pollutes the hell out of water when mined and air when burned, and surface mining can obliterate landscapes. Sierra Club has been fighting coal for years. Beyond coal.

Small streams, back country. East side of the Cascades. 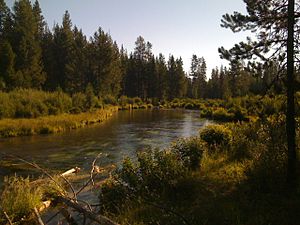 Hope everybody celebrated Summer solstice yesterday. The days are getting shorter now. And if you lost track, only 5 billion years until the last switch is flipped. In the meantime, people with a short attention span want to improve solar fuel devices. But the good news is that no one has told California condors that it will be freezing cold and dark in 5 billion years. Their numbers are expanding.

Apologize if already posted. By the way, today is flag day for the 37th best country in the world.

Apologize for missing last week. Monday holidays throw me off.

OK so more research is surfacing on the effects of micro-plastics on marine life, with profound implications for the food chain (we’re a part of it, by the way).

Not So Healthy: Young Fish Eat Microplastics Like Fast Food

“In non-exposed waters, the perch eggs hatched at a rate of about 96 percent. This dropped to just 81 percent if large quantities of polystyrene were present. The perch that did hatch in these waters tended to be slower and smaller than those observed in cleaner bodies of water.

Furthermore, the researchers observed that juvenile perch in high-plastic environments were more likely to ignore the chemical signals that alert them to the presence of predators — in this case, pike. While half of the young perch in clean waters survived predator interaction over a period of 24 hours, in waters with a high concentration of plastics, all of the perch were consumed.

In total, perch in the high plastic environments were four times more likely to be eaten than those in the clean water. While researchers weren’t able to measure the potential impacts on predator fish, there is some evidence of wider food chain effects.”

A history of snowfall on Greenland, hidden in ancient leaf waxes

An early study in this field finds that snowfall at one key location in western Greenland may have intensified from 6,000 to 4,000 years ago, a period when the planet’s Northern Hemisphere was warmer than it is today.

“A new study says that emissions from farms outweigh all other human sources of fine-particulate air pollution in much of the United States, Europe, Russia and China. The culprit: fumes from nitrogen-rich fertilizers and animal waste that combine in the air with industrial emissions to form solid particles—a huge source of disease and death.”

Stop the Fracking Lies: Public and Workers Deserve Truth and Solutions About Energy

Which trees face death in drought?

Some species succumb more readily than others. Mass die-offs have happened in several western states in the past few years.

The Forest Book of the Dead

In other news, Pennsylvania MD and CONN all have primaries today. Can Sanders cut in to Hillary’s lead?

I never knew this until recently, but a grain of rice has more genes (50,000) than humans (about 25,000). You would think a more advanced creature like us would have more, but scientists theorize that rice has been around longer, and had had to make more adaptations, thus creating more genes. An organism can never reduce its number of genes, but they can be added over time but the influence of environmental factors. Genetically the two fish below are brown trout. The first one has evolved in the environment of northern Europe.

The second has evolved in Italy.

There are many more isolated populations with color morphs more drastic, but they are all salmo trutta. The color morphs reflect the effect local environments have on the species. When they reproduce in the isolated rivers where the morphs are distinctly different, the offspring resemble the immediate parentage, that is to say they are evolving in to a very different sub-species.

Can the same be said to be true for humans political evolution? Has our species had enough time in the environment of democracy to take on unique characteristics? The politics of Iceland, or Sweden seem so very different from Italy or the US. In politics, as in the animal world, do superior traits win out? Or asked this way, will the US ever get to the point of being close to the Nordic countries? Are they on a different evolutionary path? “Back in 2010, the price of a barrel of Brent crude (the international oil price benchmark) topped $80. That made it profitable to extract oil from tight shale formations, which is especially costly. A drilling frenzy ensued, domestic oil production skyrocketed, oil companies raked in profits and oil patch communities prospered.

But all that new oil on the market, plus China’s slowing economic growth, began to dampen oil prices in the summer of 2014. Instead of curtailing production to keep prices afloat, OPEC’s leaders launched a thinly veiled price war, clearly aimed at putting U.S. producers out of business. Here are some indicators that OPEC won the war.”

Oil bust – A red state phenomenon. Will this affect 2016 elections?

We often think that the righties have the corner on the media with Limbaugh, Fox, Hannity, etc… but the left has the corner on the political comedy side of things. Comedy Central, the Daily Show, the Nightly Show, comedians in general come from the left. The right does not know how to laugh. We should be winning over in that department alone. Sarah Silverman for President. Let’s laugh tonight.

Today is the Republican Party’s last grate (pun intended) day. Big state primaries with voters in Florida, Illinois, Missouri, North Carolina, and Ohio casting votes. The strategy is to deny Trump the number of delegates needed by having Rubio and Kasich snag favorite son state’s delegates, thus blocking Trump. The pollsters are indicating otherwise, declaring Trump to be leading in all those states. After today you’ll likely see a coalescing around the presumptive nominee by the neo-fascists.

Hillary is also predicted to win all those states, but three are more like Michigan in their composition and Bernie surged from 20 some points behind there to upset all the pollsters including the rather accurate Nate Silver. So for this Ides of March, are there political assassins lurking in the halls?

She is supposed to be Hillary Clinton’s ‘go to’ voice. I admit to being so far removed from popular culture that I never heard of her, but 95 million hits on Youtube must mean something, to somebody. Adele –

Study confirms benefits of reducing the amount of chemicals you put on your body.

I knew science would some day support this, but a hunch is a long way from the scientific method. Carry on.

We interrupt our regular programs to bring you up to the minute commentary by posters of this blog on the Super Tuesday primary event. As a way of introduction and background, here is a snippet from Raw Story:

Democrat Hillary Clinton aims to build an impregnable lead on “Super Tuesday,” the most consequential day of the presidential nominations calendar, while Republicans struggle to derail their insurgent and controversial front-runner Donald Trump.

With barely 24 hours before the big day, Clinton and Trump are well positioned to secure the lion’s share of the delegate bonanza in the 11 states voting in each party’s primaries.

Baby it’s not so cold out there!

Been listening to  a lot of Pandora while converting our garage to a living space, set to the “Road Trip” station. Cats and I will be going on one on March. They play a lot of Credence on the Pandora set. Good choice.

Before the next set of primaries and Republican tantrums about Supreme Court nominees set in, how about a trip to the lighter side? Here’s Galanty Miller’s take on vegetarianism:

“It’s not that I’m against eating animals. Rather, I oppose the inhumane way in which they’re raised. It’s the same reason I won’t eat home-schooled children.

I’m a vegetarian. Vegetarian is a misleading word, though. Forgoing meat does not, by definition, mean eating vegetables. I’m really more of a Doritorian. Especially cool ranch flavored.

There has been a lot written about vegetarianism. So far, I’ve avoided the topic because I’m not sure I have any new perspective to add. But then I realized, “Hey, it’s 2016 America; I write for the same reason that everyone does everything now- to draw attention to myself.

Meat eaters argue that it’s our “biological instinct” to eat meat. Well, to those people who live in caves and hunt down wooly mammoths with a spear, you have a point. However, it’s kind of a stretch to include factory-processed Chicken McNuggets and “biological instinct” in the same sentence.

Have you tried the Slim Jim-flavored Snapple? It’s made from the worst stuff on earth.

By “biological instinct,” you mean survival. It’s our human nature to survive. Neanderthals didn’t have the pasta salad option. Luckily, life is better now. We don’t have to eat meat and we wear pants.”